All for Joomla All for Webmasters
Friday, July 3
You are at:Home»Gospel Entertainment News»News: Donald Trump confirms he is Considering Reactivating Torture Techniques for Terror Suspects | Read the Full Transcript of his First Presidential Interview
Want create site? Find Free WordPress Themes and plugins. 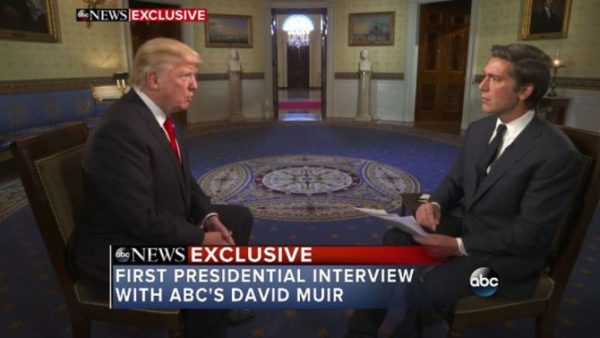 In a White House interview done with ABC News last night, President Donald Trump
has confirmed that he is considering reactivating torture techniques
for terror suspects. This comes days after it was reported that he is
considering a law to stop America from issuing visas to seven Islamic
countries.
In the interview, he also talks about the Mexico border wall and he says that construction will begin in months.
The exclusive one-hour television interview with ABC News anchor David Muir was filmed in the White House and is Donald Trump’s first interview as President.
President Trump also said he will launch an investigation into
alleged voter fraud following his unsubstantiated claims that millions
of people illegally cast ballots during the 2016 election.
He says “You have people that are registered who are dead, who are
illegals, who are in two states. You have people registered in two
states. They’re registered in a New York and a New Jersey. They vote
twice. There are millions of votes, in my opinion. When you look at the
people that are registered: dead, illegal and two states, and some cases
maybe three states — we have a lot to look into.”

Read the transcript of the interview below!